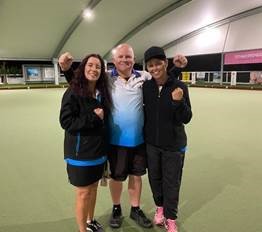 After a standout season on the national stage, winning a place in next season’s televised Bowls3Five league would simply be the icing on the cake for Takapuna.

And with a recent win in the regional playoffs opposite Hikurangi, Takapuna now find themselves one stage away from that feat – recently booking themselves among the national qualifiers for the Finals Weekend in Naenae next month (12 & 13 June).

Represented by Simon Poppleton, Lisa Parlane and Blackjack Wendy Jensen, the formidable trio will be ones to watch as they go head-to-head with some of the country’s best.

Backed by a huge support base, Poppleton and Co ended the spirited run of Hikurangi in straight sets, continuing their strong form.

Dubbed The Blue Wave, plans are already in place for supporters to make the trip to the capital, be that plane, sea or road, with dozens getting right in behind their club’s title hopes.

“It’s like anything, you have to go in confident and give yourself every chance of fighting for the win. I’m pretty fortunate to have teamed up with two very, very good ladies in Wendy and Lisa – and as a team, we’ve gelled nicely,” Poppleton said.

“I’ve heard on good ground that we’re going to have a fair crew making the trip down, so we’re looking forward to hearing that support and “Go Taka, Go Taka” ringing out from the sidelines – it’s going to be great and one heck of an experience.”

Asked how the team plan to keep fresh and in good touch now the outdoor season has concluded, Poppleton said he was looking forward to a short break.

“Some people play all year round, throw themselves into the PBA and play through winter too. But, I’m a big believer in freshening up, and although we’ll be practicing, we won’t be overdoing it,” he said.

“With no home teams through, all visiting teams will be on a level footing from the start, so we’ll be getting there, getting set and taking each game as it comes.”

Though the win has come at a small cost, with Poppleton himself a top indoor bowls representative and Auckland selector – forced to miss the National Indoor Championship singles discipline in Blenheim – which appears to have clashed.

“That’s alright, I’ve done everything I wanted to do with indoor, so to pass up on the singles is no huge problem. I’ll be crossing the Cook Strait on the Sunday and will get stuck in to the rest of the event from there.”

And with the possibility of playing their way in to the televised Bowls3Five League (top two to qualify), to say Poppleton and his team are excited at the prospect is likely a significant understatement.

“The whole club know what’s at stake and are right in behind the concept, pushing us all the way.

“If we end up playing in the final, and qualifying for TV, it will be a real feather in our cap as individuals, as a team and definitely, as Takapuna.