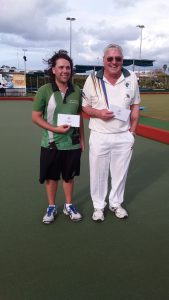 Aiden Takarua, one of New Zealand’s most promising young players, gave a vivid illustration of his immense potential with an impressive win in Bowls North Harbour’s Ivan Kostanich memorial open singles at the weekend.

In Sunday’s final at the Takapuna club Takarua beat a hardy competitor in Northland’s Paul Wightman 21-17, having earlier accounted for a number of other accomplished players.

The 20-year old from the Point Chevalier club won his semi-final from a previous winner and one of North Harbour’s most decorated bowlers, Browns Bay veteran Colin Rogan, 19-13, and in the quarter-final he beat another of New Zealand’s rising stars, Rory Soden, who is now with the Mangere club in the Auckland.

In all these matches Takarua’s ability to be accurate with his draw bowls, as well his weighted shots, despite a difficult wind was a factor. A player for only six years, Takarua already has three Auckland centre titles, is skip of that centre’s representative fours team and is in the national development squad.

It was the second time Wightman has been in the final of this event, having been beaten in 2011 by Rogan. But the 65-year old from the Mangawhai club has compiled a consistent record since starting playing in 1995, with six centre titles to his credit.

His wife, Sue, is also a talented player, having won the national women’s singles title in 2009.

Wightman made the final with a 21-15 win over another veteran, Auckland’s Joe Whitelaw.

Rogan was by far the best of the Harbour bowlers, with Warkworth’s Stuart Macdonald eliminated in the quarter-finals by Whitelaw and Manly’s Kevin Rainsford well beaten in his quarter-final by Rogan.

It was a top effort, though, by Rainsford, who is just out of junior ranks. He made the final eight with a comfortable win over Riverhead’s Steve Cox. Last season’s winner, Northcote’s Brent Malcolm, was among the non-qualifiers.

For winning Takarua pocketed $500, Wightman $300 for being runner-up and the two beaten semi-finalists, Rogan and Whitelaw, each won $200.