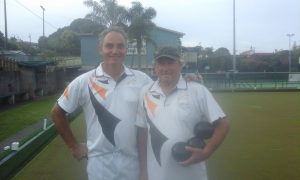 They start their defence in a competitive qualifying section at the Riverhead club. The section also features some hardy Birkenhead bowlers in Nigel Drew and Mark Rumble and Mick Moodie and Doug Campbell, plus two former stalwarts of that club in Garry Banks and Roy Parker, both of whom are now with Beach Haven.

Several of the combinations in the weekend pairs, like Turner, are coming off a few days of successful bowling at the national singles and pairs championships on Auckland and Harbour greens.

Others in the men’s qualifying sections on Saturday at the Riverhead, Milford, Birkenhead and Takapuna clubs include the 2017 champions, former Black Jack Tony Grantham and his Browns Bay club-mate, Scott Mouton.

They are sure to set as high a standard as Chapman and Turner.  Others who should do the same include multiple centre champions Colin Rogan and John Walker, Riverhead’s Steve Cox and Duane McDonald, Orewa’s David Eades and Bruce McClintock and Takapuna’s Murray Mathieson and John Janssen and Chris Taylor and Bevan Smith.  Another formidable Browns Bay pairing will be Adam Haywood and Scott Cottrell.

But there are plenty of other competent bowlers besides these and it would be rash to suggest that the eventual champions will come from this group.

Mairangi Bay will host Sunday’s post-section in both men’s and women’s championships, as well as the women’s qualifying section.

Both having moved clubs, Lisa Parlane and Anne Dorreen, won’t be able to defend the women’s pairs title they won with Browns Bay last season.

But Parlane, now with Orewa, in particular will still be in a strong position to add yet another centre title. Her new partner will be the accomplished and highly successful performer at centre and national levels in Elaine McClintock.  She, too, has moved to Orewa.

Dorreen will have as her partner Takapuna’s promising Robyne Walker. Both did well at the recent nationals.

Mairangi Bay’s Jan Gledhill and Colleen Rice, the 2016-17 champions, are also in the field and will be sure to make the most of home green advantage. And there are several others in the small, but quality entry who are among the centre’s best women’s players, including Birkenhead’s Ruth Lynch and Carol Fredrick, plus other multiple gold star holders in Caryl Miles, Shona Chambers, Gail Dick. Denise Samuels, Lisa Helmling, Anne Hellier, Noelene Culpan and Jan Jones.

Milford 5000 - Outside clubs leading the way in entries