Combinations from Riverhead and Takapuna provided memorable days for their clubs at the weekend with dramatic wins in the men’s and women’s finals of the North Harbour centre pairs championships. 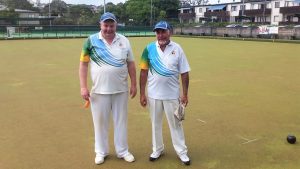 Gordon Smith and Harry Moore, outsiders in the field, gave the small, but competitive Riverhead club another title with an upset win in the men’s final over the powerful Browns Bay pairing of former Black Jack Tony Grantham and Scott Mouton, the champions in 2017. 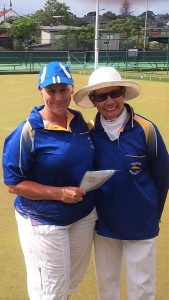 And Takapuna’s Trish Croot and Connie Mathieson came from behind with consecutive threes on the final two ends to snatch a thrilling 17-15 win over the more favoured Orewa pairing of Lisa Parlane and Elaine McClintock, who between them have nearly 30 centre titles. This was an especially fine match between four excellent bowlers, with the lead chopping and changing.

Smith and Moore are among a number of bowlers from Auckland’s west who have moved to within the Harbour centre and made Riverhead in particular a formidable force in recent years. Others who have switched to Riverhead include the likes of Steve Cox and Grant Goodwin. Smith, who’s 53 and a bowler for 18 years, and Moore, who’s in his late 60s and has been bowling since 1999, are also members of the Te Atatu-based Pringle Park club which is affiliated to Auckland.

For Smith it’s his second Harbour title as he was also in a winning triple with Cox and Goodwin. But for Moore it was his first and it came entirely from the blue as he hasn’t played seriously for two years and has been more interested in following a passion for fishing in his boat on the Kaipara Harbour.

Despite only just qualifying, they were always in charge in the final against Grantham and Mouton, taking an early 11-4 lead after nine of the 18 ends and then throttling any chances of a Browns bay comeback by picking up a five on the 14th end to take a virtually unassailable 17-8 lead.

It was a great day for Takapuna for as well as the championship winning women’s pair, two of the club’s combinations made the men’s semi-finals, with two of the players, Bob Telfer and Jerry Belcher only fourth year bowlers.

Telfer, playing with Norm Scott-Morrison, lost to Smith and Moore in the semi-finals, and despite a late rally could not recover from dropping six shots on the sixth end. But to make the last four was a mighty achievement, with one significant win over the strong Orewa pair of David Eades and Bruce McClintock.

Though well beaten by Grantham and Mouton in the semi-finals, Belcher and his experienced skip Graham Skellern scored some notable wins, too, over the likes of John Walker and Colin Rogan, Steve Cox and Duane McDonald and in the quarter-finals, Bart Robertson and Neil Connell.

In the women’s semi-finals, Croot and Mathieson beat Orewa’s Christeen Dalzell and Jan Harrison and Parlane and McClintock beat another Orewa line-up of Elizabeth Ring and Tira Campbell.

The win in the final gave Croot her fourth centre title and within reach of a gold star and it ended a sequence of runner-up finishes in this event for Mathieson who now has three centre titles, the same as husband Murray.