Though it was a red-letter day for the Takapuna and Birkenhead Clubs, a fourth-year bowler from the host Mairangi Bay Club, Theresa Rogers was the star turnout when two of the centre’s most prestigious titles were decided on Sunday.

Rogers, in the most poignant of circumstances, came close to upsetting most predictions by winning the women’s championship singles. After leading Birkenhead’s vastly experienced Ruth Lynch 16-4 Rogers eventually succumbed to Lynch’s remarkable comeback and was edged out 21-19.

But what made Rogers’ performance special was that she was playing in the shadow of a personal tragedy. Just two months ago she lost her husband Neil, who had only just retired and had become a bowler himself, when he died from liver cancer aged 65. “Bowls has been my salvation,” said Rogers after the match,

Earlier Rogers had shown her mettle by qualifying with a 21-20 win over one of the centre’s best women’s players, Elaine McClintock, then with a semi-final win over last season’s champion, Birkenhead’s Trish Croot. That Rogers did so well confirmed the promise she showed two seasons ago when as a second-year player she won three centre titles as a specialist lead.

With her win Lynch, who won the national fours title in 2012, added to her formidable collection of centre titles, she now has 23. Her win also maintained Birkenhead’s fine record in recent women’s events for two of the other semi-finalists came from the club, with Adele Ineson joining the final four along with Lynch and Croot.

Takapuna also supplied three of the semi-finalists in the Dick Bree Triples, a feat that was capped off when the club’s Chris Taylor won the final skipping Bevan Smith and Dennis Hale to a 20-8 win in the final over Northcote’s John Hindmarch, Mike Haggart and Kenny Moran.

That gave Taylor his centre gold star for winning five centre titles, with Smith, a former Olympic track athlete, and Hale taking their first and second respectively. Like Taylor, Smith and Hale have been accomplished indoor bowlers and remarkably Hale is only in his third season as an outdoor bowler.

The other Takapuna combinations in the last four were Paul Freeth, Murray Mathieson and Trevor Forward and Norm Scott Morrison, Marty Martinengo and John Janssen. Taylor’s team won its semi-final from the Mathieson line-up but only after surviving a late slump when they lost the last six ends.

In the quarter-finals helped by the immaculate draws bowls by lead Forward, the Mathieson side had upset the Browns Bay triple skipped by Black Jack Tony Grantham. Hindmarch, a booming driver, and his Northcote line-up caused another boil-over by ousting the defending champions, a powerhouse Browns Bay side skipped by Kerry Chapman and with Scott Evans and Rory Soden up front. 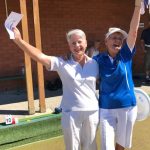