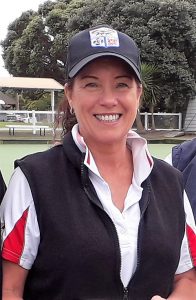 to the highest levels of bowls was completed yesterday when she was recalled to the national women’s side, for which she last played in the early 2000s.

Jensen, North Harbour’s leading women’s bowler this season, was confirmed as the Black Jacks’ lead in both fours and triples for the Asia Pacific championships to be held on Queensland’s Gold Coast on June 18-28.

It capped a fine season for the Orewa club member and was a reward and recognition of her high percentage of accurate draw bowls in the recent national championships, in which she reached the final stages in all disciplines.

Her consistency has seen her win three centre titles this season to earn her a Harbour gold star. Wins in the championship triples and singles and with Orewa in the premier pennants have added to the  three titles she won in the 2012-13 and 2013-14 seasons as a member of Browns Bay.

Previously with the Counties and Auckland centres, Jensen has already tasted international success. At the 2002 Commonwealth Games she won a bronze medal in the fours and in the world championships in England in 2004 she was again a bronze medallist.

Her determination to regain a place at the game’s top levels this season has been reflected in the regular commutes she and her partner, Mark Fletcher, also a useful bowler, have made to the North Shore from their Pokeno home in a camper-van.

Jensen’s recall is an illustration of a refreshing and welcome approach which has been made by Bowls New Zealand and the selectors headed by the legendary Peter Belliss. In past years many have interpreted Black Jack selections as a deliberate over-looking of bowlers because of age.

But both the men’s and women’s sides for the Asia-Pacific have a solid smattering of maturity intermingled with youth and athleticism. As signalled when the national squads were named some weeks ago, Gary Lawson has been recalled at long last and others either nearing 50 or past that age who have been selected are Jensen, Mike Kernaghan, Val Smith and Jo Edwards.

Clearly the best available players have been chosen for the Asia-Pacific championships, which have added importance in being a qualifying event for next year’s world championships.