Northcote, a club used to battling the odds, was a deserving and decisive winner of

The North Harbour PPL competition when it was concluded at the weekend.

Northcote scored 31.5 points in the final round to be well clear of Takapuna’s 22, Orewa Seagulls on 20.5 and the Orewa Tuis on 16.

It was a notable success by Northcote’s Shaun Bayne, David Pierce, Greg Taylor, Ray Tomes, Brent Malcolm and Mike Haggart, as it faced strong opposition in the other three teams which were studded with centre title-holders.

All of Takapuna’s players have been centre champions and at least two, Trevor Forward and Chris Taylor, are gold-star holders. The others were Trish Croot, Connie Mathieson, Brett O’Riley and Norm Scott-Morrison.

But Northcote’s struggles in recent years against the threatening tides to its base near Shoal Bay have given its players a tough mental attitude and this quality came to the fore in the final rounds.

Northcote started slowly losing to Takapuna, but then swept past the two Orewa sides, while Takapuna, over the final two rounds, despite playing on its home ground, faltered a little.

The cut-throat nature of the quickfire sets format and the high playing standard meant not one of the pairs went through the three rounds without a defeat. The quality of most matches kept a good attendance at the Takapuna club absorbed.

Generous sponsorship from Ryman Healthcare provided a healthy stake with Northcote taking first prize of $600, Takapuna $400 and a total of $450 for the two Orewa teams. All of this money goes into the funds of the respective clubs.

Takapuna might have been left with third prize of $250 but won an additional $150 when with his last bowl Scott-Morrison drove the kitty into the ditch for a crucial win.

Any Takapuna disappointment in finishing runner-up, however, was eased when on the same day a member of the club, Black Jack Selina Goddard, continued a rich vein of form by having a brilliant win in the Stoke club’s prestigious women’s singles tournament. This event attracted almost all of the country’s best women’s players, including Mandy Boyd, Wendy Jensen and Sandra Keith. 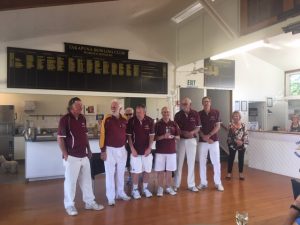