Finals of the Bowls3Five played this weekend – Lindsay Knight 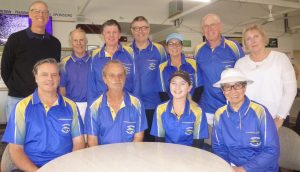 Not even the most imaginative writer of a Hollywood drama could have penned a climax more nerve wracking as Takapuna emerging as the Northern region’s premier 3-5 champions in the play-offs staged yesterday under the Orewa club’s impressive indoor green.

With literally the last bowl of the contest Takapuna’s Graham Skellern sealed the result just when it seemed the North Harbour club had been foiled by a highly competitive Hikurangi line-up representing the Northland centre. 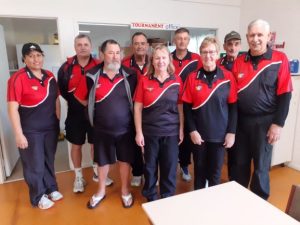 For with her last bowl Hikurangi’s former Black Jack, Manu Timoti, appeared to have given her side an almost miraculous win.

Five-down on the tie-breaker end, which was required after the first two sets between Skellern’s trio of Selina Smith and Ray Skoglund and Hikurangi’s Timoti, Steve Mitchell and Richard Yanko, had been shared, Timoti with her last bowl played a perfect shot to dead draw the jack.

That seemed to have given Hikurangi both that match and the overall result. But under the most extreme pressure, and with no other option, Skellern used all of his vast experience to unleash a drive every bit as precise as Timoti’s superb draw bowl. He cannoned into the head and killed the end and with the jack spotted on the 2-m mark secured the win.

In both this contest and the North Harbour final, which Takapuna won against a gallant Orewa side, tension and a high measure of skill were ever present in what was an excellent demonstration of the format and of the Orewa club’s new facility.

Tie-breakers were also needed in the other Takapuna-Hikurangi matches when in each the sets were shared.

But after having been outplayed in their second set, Takapuna’s Trevor Forward, Murray Mathieson and Connie Mathieson, squared the games by winning the tie-breaker from Leanne Stewart, Richie Naera and Graeme Lawrence.

In this crucial match Hikurangi might have made a tactical error by giving the mat for the tie-break to Takapuna, which immediately switched to short ends, thus breaking the rhythm Hikurangi had enjoyed with longer ends.

Takapuna was unbeaten in the Harbour play-off against Orewa, winning two of the tie-breakers which were needed after the sets had been shared in all three matches.

It was a game effort by Orewa, which made a commendable decision to stick with the players who had made the Harbour final rather than bringing in one or two of the club’s stars who had not been in the original side.

The Orewa side, which was a close second, was Tony Rickerby, Jan Harrison and Trish Higginson, Warren Seeque, Kevin Davy and Christeen Dalzell, Ross Higginson, Murray Vallance and Judy Smith.

Helensville won the one-five section, beating Orewa in the Harbour play-off, using the power play on the last end of the second set to take six shots and come from a 1-7 deficit. That drawn set added to its first set win was enough for the win Helensville’s Callum Clark, James Lomax and Noel Stubbs then won the regional play-off from Northland’s Mangawhai.

Takapuna and Helensville now meet teams from the Counties centre to try to qualify for the national finals in at the Naenae complex in Wellington’s Hutt Valley. 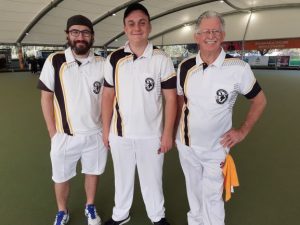