The King and Queen of the World Cup Indoor Singles, Kiwi Jo Edwards and Irishman Jeremy Henry, will prove a daunting prospect for many – but as the 2018 event gets underway this week, expect plenty of willing challengers wanting to make their own mark.

Now in its 14th year, the annual international showdown has seen both Edwards and Henry collect the silverware on five occasions – an unprecedented record on the indoor carpet and one unlikely to be matched for many years, if ever. 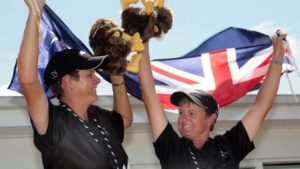 LONG-TIME PALS JO EDWARDS AND VAL SMITH MAY FIND THEMSELVES GOING FROM FRIEND TO FOE LATER THIS WEEK, AS BOTH KIWI HOPEFULS TAKE TO THE WORLD CUP INDOOR SINGLES FIELD AT WARILLA.

Hosted at Henry’s home club of Warilla, more than 20 international hopefuls will take to the rinks from March 6-14 in a bid to qualify for the business end of the competition and be crowned world champion.

With Edwards returning as the reigning champion through automatic selection, former Commonwealth Games silver medalist Val Smith has been given the nod in the singles berth, hoping to build a strong platform leading into next month’s Commonwealth Games on the Gold Coast.

Meanwhile, heavy-hitting Blackjack Ali Forsyth, who took out bronze last year, will once again be unleashed as a player to watch and with fresh New Zealand titles in the pairs and fours respectively, Forsyth will be expecting to up the ante and goes into the field as a likely contender for the cup.

Forsyth’s main threats will of course be Henry, though some strong competition will be felt lining up against recently crowned New South Wales number one David Ferguson, last year’s finalist Soufi Rusli of Malaysia, the Broadbeach-based Scottish star Kevin Anderson, Hong Kong powerhouse CT Wong and amongst all else, his own brother Russell – who is entering the field as the Japanese qualifier – albeit the siblings are not drawn to play in section qualifying.

Other players to watch in the men’s field will be Malta representative Brendon Aquilina, who has recently signed for the Warilla club, Canadian hopeful Hirendra Bhartu and Turkish superstar Ozkan Akar, while in the women, expect a strong campaign from Canadian youngster Priscilla Westlake and Aussie-based Scot Kay Moran – both more than capable of holding their own in the top echelons.

The Cup format will see two pools of round-robin matches take place with the pool winner advancing directly to the semi-finals. Section runner-ups and third place getters will then battle it out in a new open draw sudden death format that will see the winners progress through to make up the remaining semi-finalists.

Commencing from March 6 at the Warilla Bowls and Recreation Club in NSW, be sure to follow
the action as yet another fine field take to the greens in a bid for world glory.