Wellington teenager Seamus Curtin has ended the Easter Weekend as National U21 Singles Champion, while Glenfield starlet Paris Baker has walked away with the Women’s U21 title for 2018.

Following a gruelling few days of competition, where for some the U18s played a part on Friday and Saturday, the U21 Kittyhawk competition has concluded at the Naenae complex in Wellington.

With notable absences including reigning champion Jonty Horwell and promising southerners Caleb Hope and Tom Taiaroa, the competition appeared to be dominated by Wellingtonians with recently crowned Intercentre champions Bradley Down and Curtin among the mix, alongside the respective U18 champions Finbar McGuigan and Natasha Russell.

After narrowly missing out on the U18 title just a matter of days ago, Curtin – a former silver medallist at the Youth Commonwealth Games and third-equal at this year’s National Open Championships men’s singles, bounced back in convincing style defeating McGuigan in section play and going on to win section one.

Section two saw fellow Stokes Valley team-mate James Cameron-Powell advance through his section as the best performed, setting up an eagerly anticipated final with Curtin, with U18 finalists McGuigan and Brady Amer painstakingly missing the cut.

As the swirling gales strengthened prior to the final, players were given the option to transfer indoors to the carpeted rinks – of which all players agreed was the favoured decision to conclude the tournament.

The final saw Curtin put on a masterclass under the lights to run away with the silverware 21-10, adding to his already impressive resume and further stamping his authority as one of the most consistent youth players rising through the development tiers. 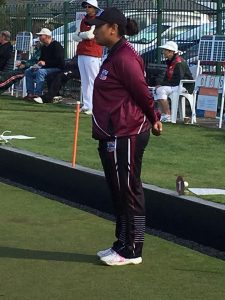 Across rinks, Baker, a former U18 champion and North Harbour representative in her own right, rounded out a strong campaign, racking up a series of comfortable victories to clinch top honour – slightly ahead of Te Atatu Peninsula hopeful Mackenzie Blucher and back-to-back U18 singles champion Natasha Russell, who finished second and third respectively.

In a round-robin format of nine fixtures, Baker dispatched Russell 21-10 in round five, while Blucher also handed Russell her second loss in round eight to secure runner-up position.

Bowls New Zealand Lead Coach National Development Evan Roberts said he was impressed with this year’s field and was quick to heap praise on everyone involved. “The camaraderie and respect shown to each other, markers and technical officials was outstanding across the board. The athletes (bowlers) themselves, parents and coaches should take pride in not only their performances, but the way in which they conducted themselves through the weekend,” Roberts said.

“These events provide a great incentive to all developing bowlers, new and experienced – and allows them to gauge where their game is at personally among their peers in an environment of support and encouragement.”

With all the action now concluded, Plimmerton’s Finbar McGuigan and Clayton rep Natasha Russell successfully wrapped up the U18 tags, while Stokes Valley’s Curtin and Glenfield’s Baker reigned supreme as 2018 U21 Kittyhawk Champions.

Congratulations to all champions.