Champ of Champ Triples weekend round up – Lindsay Knight 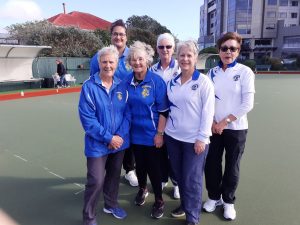 Ruth Lynch added to an already impressive list of bowling achievements when she secured her 25th centre title by skipping her Birkenhead line-up of Millie Nathan and Amy Little to the North Harbour champion of champion triples at the weekend.

In a tight final at the Takapuna club the Birkenhead combination finished strongly to beat Mairangi Bay’s Jan Gledhill, Gaye Horne and Theresa Rogers 19-15 for Lynch to enhance her legendary status in Harbour bowls and add a fourth bar to her gold star.

Nathan, by contrast, is at the opposite end of her bowling career and is still a junior, but with the weekend’s success she already has two open centre titles to her name.

In completing a strong team Amy Little gave the small Belmont Park club a share in centre glory. For the 74-year old plays most of her bowls there but to gain more competition is a dual member at Birkenhead.

She led well against a strong opponent in Rogers, who in the previous week had ousted Lynch in the pairs, to gain her first Harbour title. However, previously she played in Northland and has won four titles in that centre.

In the semi-finals Birkenhead had a comfortable win over Manly, but Mairangi Bay was involved in a thriller against Takapuna’s Wendy Jensen, Trish Hardy and Anne Dorreen, winning 14-13 only after an extra end.

Mairangi Bay’s quarter-final against Orewa’s Lisa Parlane, Elaine McClintock and Christeen Dalzell was just as tight, with Mairangi recovering from a big deficit with a four and five on the 16th and 17th ends to win 19-18. 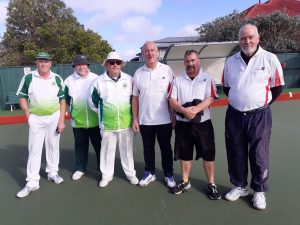 At 17-7 after 13 ends Orewa looked to be cruising, but it then dropped the final five ends and might well have been pipped had Howden not managed to reduce the count of each of the last two ends.

Until its late recovery the Warkworth side had struggled against the steadiness up front of Eades and McClintock and it was only some excellent bowls from Macdonald, especially on the drive, which made the game competitive. But then, albeit just a little too late, Beretta and Mitchell began to find their weight in what was tricky, easterly wind.

It was Eades’ eighth centre title, while Howden put himself in sight of a gold star by taking his fourth, the first two of which were with Takapuna.

And in the quarter-finals Orewa ended the hopes of yet more titles for Browns Bay’s ’s Neil Fisher, John Walker and Colin Rogan with a surprisingly comfortable win.