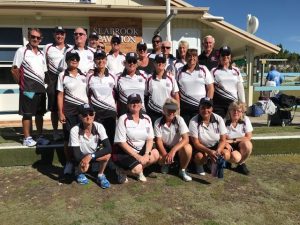 We would like thank all our representatives who played for North Harbour in the 1-5 Year Tournament at Claudelands Hamilton on Sunday.

Especially proud of the Mens 1-5 Year performance once again against Auckland,

Northland and Waikato with Harbour achieving the highest points total.

This combined with a very good performance from the Womens 1-5 Year Team resulting in North Harbour coming second overall.

A big thank you to our Mens Year 5 bowlers who now retire from our team as we have certainly valued their confidence, experience, loyalty and excellent friendship as team members.

We are now recruiting new members for a Mens 1-5 Yr Development Squad for next season so are calling on all clubs to forward further names as their recommendations for future BNH Representatives.

Results of Reps fixture at Mangawhai and Waipu